Red Willow Bark to aid meditation. 1 oz/28 grammes. It has calming and soothing properties, ideal for clearing and meditation. Red willow bark is a plant that’s often tried and used as incense. When the bark is burnt, it produces a calming smoke.It is mixed with sacred pipe blends and is thought to make the link to immortality. It is also the patron herb for communication. Native Americans use this as a fever reducing agent.

Known as “Cansasa” to the Lakota, Red Willow Bark is a spiritually important herb within the Native American culture. It is often used during times of ceremony to show respect or give spiritual protection; socially, it can be shared with close friends and family to promote kinship. Classification: Although it assumes the Willow name, the bark is actually that of the Red Osier Dogwood (Cornus stolonifera).Aroma: Sweet and woodsy.

Red Willow smoke is not addictive like tobacco. It has not been found to cause mood alteration or other psychogenic activity.** Tobacco has had a sacred purpose within the Native American culture for thousands of years. Sacred use of tobacco does not include the use of commercial tobacco products. 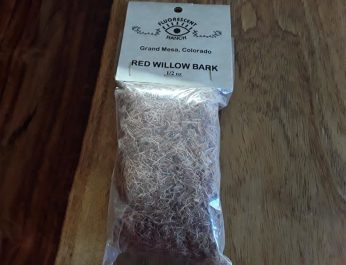 You're viewing: Red Willow Bark to Aid Meditation £7.75
Add to basket
Get 10% off your next order!