Olive Leaves and Olive Leaves Powder The first formal medical mention of the olive leaf occurred about 150 years ago – an account describing its ability to cure severe cases of fever and malaria. In 1854, the Pharmaceutical Journal contained a report by David Hanbury that included this simple healing recipe: “Boil a handful of leaves in a quart of water down to half its original volume. Then administer the liquid in the amount of a wine glass every 3 – 4 hours until the fever is cured.” The Olive Leaf was so important to the Ancient Egyptians that they regarded it as a symbol of heavenly power. Not only did they extract the oil to mummify their kings, it was used as a powerful defender against a wide variety of maladies too. This tree was so important it was referred to as the “Tree of Life” in the bible, held in such high esteem that Moses is said to have excluded olive tree growers from military service. In the early 1900’s scientists isolated a bitter compound, “oleuropein”, that was thought to give the olive tree its disease resistance. And so through the later 1900’s oleuropein was found to lower blood pressure in animals, increase blood flow in the coronary arteries, relieve arrhythmia and prevent internal muscle spasms.

Olive leaves are important for heart health, lowers blood pressure, anti-cholesterol, supports arterial health, decreases insulin resistance and increase the production of insulin by the pancreas, hypoglycaemic controlling blood glucose levels. It supports the immune system, maintaining overall good health and relieves symptoms of coughs, colds and flu. It has five times (400%) more antioxidant power than the equivalent amount of Vitamin C. The Olive Leaf also has anti-viral properties with research showing that extracts can effectively fight against a number of disease causing microbes. These powerful compounds destroy invading organisms and don’t allow viruses to replicate and cause infection.

Olive Leaf Tea: Use 30g of Olive Leaf per litre of water then boil until the water reduces to half the amount. Drink up to 2 cups per day – one in the morning and one in the evening. Can be drunk hot or iced with a slice of lemon.

Olive Leaf Powder can be added to smoothies, encapsulated or mixed with a little water or juice. A typical dosage of Olive Leaf is one to two grams of powdered leaf up to three times per day.

Have a look at our Herbal Information Pages to read more about this herb. Please research thoroughly any new herb you are thinking of using. If pregnant or taking prescribed drugs, have a chat to your doctor first 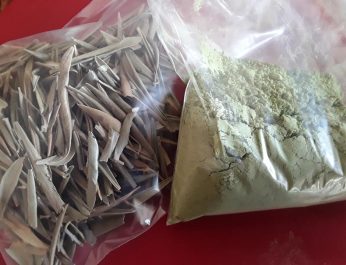