Tan Dream-catcher Necklace. This dream catcher is hand made by the Navajo craftsman Curtis Bitsui and is guaranteed authentic Native American art. Please note that as this is a hand made product bead colours can vary. Diameter of ring 4cm (1.5 inches). Total length of leather thong about 17inches. Can be adjusted. Country of origin: USA. Part of Native American belief, dream catchers are designed to sit above the bed to catch bad dreams while letting good ones drift down to the sleeper.

Curtis Bitsui is a member of the Navajo tribe and lives in the USA. We trade directly with this artist making sure he receives a fair price for his work. All items will be good quality but because of the hand made nature of the goods it is possible that crafts such as these may have small differences between them. These small differences (if there are any) should be seen as a testimony to the fact that you are buying authentic Native American crafts.

The Navajo’s story: The Navajo call themselves Dineh, which means “The People” in the Navajo language. Closely related to the Apache, the Navajo are an Athapascan-speaking people who migrated southwest from the west central Canada around the 15th century. By the time Spanish explorers came across the Navajo in the 16th century, trade had long been established between the Pueblo peoples and the Navajo, exchanging maize and woven cotton goods for buffalo meat, hides and material for stone tools. Because they hunted buffalo, lived in tents, and used dogs to pull travois loaded with their possessions, the Spanish referred to them as “dog nomads.” The Navajo Nation has built a modern economy on traditional endeavors such as sheep herding, fiber production, weaving, jewelry making and art trading. Newer industries that employ members include coal and uranium mining, though the uranium market slowed near the end of the 20th century. The Navajo Nation’s extensive mineral resources are among the most valuable held by Native American nations within the United States. The Navajo government employs hundreds in civil service and administrative jobs. Other Navajo members work at retail stores and other businesses within the Nation’s reservation or in nearby towns.

Be the first to review “Tan Dream-catcher Necklace” Cancel reply 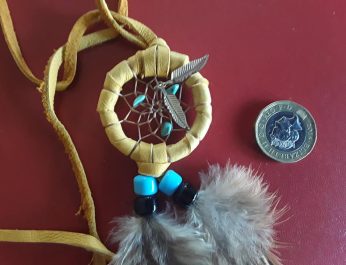 You're viewing: Tan Dream-catcher Necklace £13.95
Add to basket
Get 10% off your next order!